Yunessun is a specialty hot spa getaway.  It's different in that it offers more of a family-oriented spin to the hot spa in addition to the tradition nekkid hot spa.  What's also unique is that it's buried away in the mountains of Hakone, which reminds me of the Big Bear/Mountain High area back home.  So, picture a ski resort, then replace the whole skiing aspect of it with "flavored" jacuzzis and water slides--then you've got yourself a Yunessun. 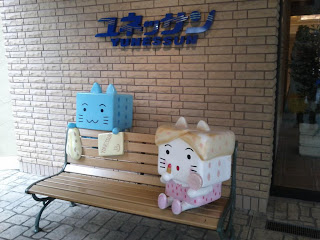 First up, the mascot of this place. I figured something along the lines of cat-faced block head would be fitting title for this character.  The Japanese would probably call him moochi-moochi or something =p

So walking out of the locker rooms (which are uber clean, I might add) you see this: 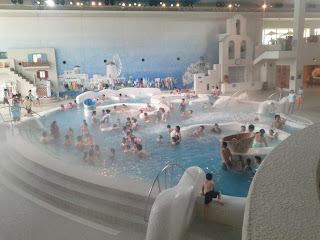 This is the general kiddie splashy play area.  I took one look and was instantly reminded of the south park episode where cartman learns how to swim in the public pool.  Next! 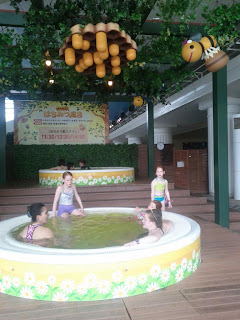 Yeah sure, the water looks like urine ripe from the bladder of an unknowing kid, but I swear to god it smells like honey.  And just by chance I snapped a picture of half of all the white people at Yunessun, hah. 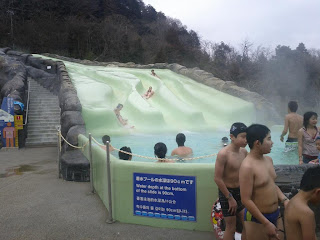 Hells yeah, water slides in 47 degree weather!  Oddly enough, being topless out in 40 degree weather sounds bad, but after running up those stairs a few times, your body really gets acclimated rather quickly.  Being at the top of the slide was always kinda fun, considering I'd be waiting in line next to five year old kids.  They never looked at me funny once, hah. 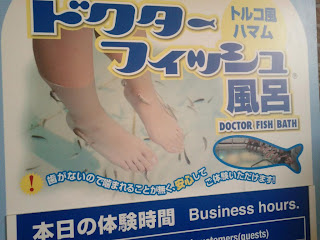 Next up is Dr. Fish.  Apparently the wait can grow up to 45 minutes in the summer, as I was told by our tour guide.  I waited about 15 minutes or so on this cold-ish day.  So, you wait in line, you get to an area where you're forced to wash then dry your feet, then you're allowed to submerge your feet into a jacuzzi size/shaped luke-warm foot bath.  Inside this jacuzzi-like bath are these wee little fish.  No idea what type of fish they are, but they'll come up to you and suck on your toes/feet!  If there was a contest to see who could garner the most attention from the fish, I totally whupped ass.  I had about 40 fish on my feet!  From what I could guess, I had roughly 1/4-1/3 of the fish, even though there were about 15 others in the bath with me!  I think the difference was that I really thoroughly dried my feet as to not bring in any chlorine/flavoring from the other baths. 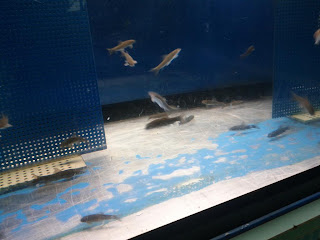 Even though it was fun, it took a bit of effort not to freak out.  When these guys suck on your feet/legs, it elicits a natural, "I've got some shit crawling up on my leg!" response, which I had to actively suppress.  Since I was busy whupping everyone else's ass at being the fish pimp, I couldn't lose my cool.  Heww naww. 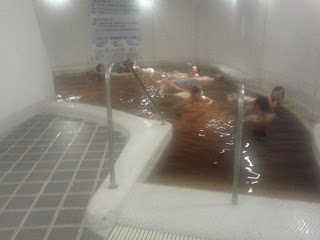 This next motor-oil looking bath was called the floating bath.  I was told that the water was heavily salted, but in reality it felt like some sort of cooking oil.  Anyways, it's appropriately named because you float super easily.  All you need to do is to lean back, and up your body will float.  At any point, a deep breath of air will really send your body up towards the surface. 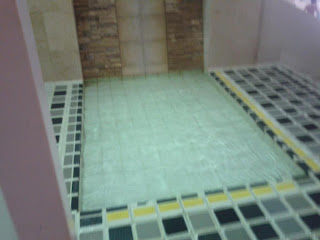 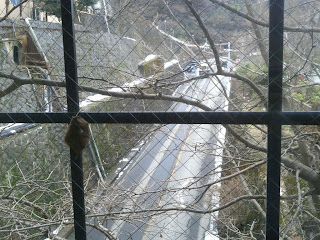 Those were the highlights from Yunessun.  As you cross over to YuTopia, you walk over a bridge that overlooks the highway.  Look, snow!  People are walking around topless in weather that can sustain ice on the ground! Ok, I apologize about the off-center shot.  There were a lot of people looking at me as I was trying to frame the shot, and I didn't want to be kicked out due to acting like a child molester.  It's hard to look legit when you don't have another person (esp. NOT a bunch of little kids) to be on the receiving end of the shot!

Anyways, that's a coffee bath, it doesn't look very much different than the other baths so you're not missing out on the aesthetic.  But one thing you'll note under the hut-on-stilts thing is that giant metal cylinder.  That's where the coffee gets made.  Every two hours or so one of the YuTopia workers comes out, makes a little speech in japanese (no idea what the hell he's saying), then goes and starts pulling bucket after bucket of coffee from that cylinder, only to dump it on the folks in the bath!

That was totally the highlight of my day.  Just being crammed shoulder to shoulder with young children and their parents in a teeny-little bath, all excited to have freshly-brewed coffee dumped on them was so uplifting. It's like the type of fun you used to have when you were a little kid.  Just sincere, no bullshit. 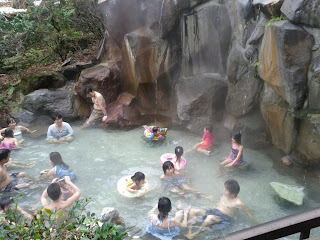 "Waterfall Bath"  By this time I was a bath snob.  Get that generic waterfall crap out of here!  Hah, jk.  This bath was nice because it had a rock bed with nice rounded rock pillows. 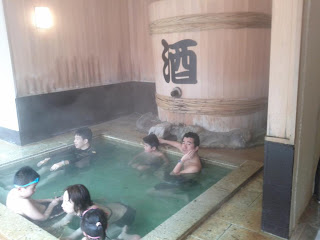 Sake bath.  There was a specific warning to the side that read, "Warning, do not drink the sake."  Hah.  It definitely smelled like sake.  I should note that I was completely dry at the start of taking these pictures.  With a couple people noticing that I was just walking around taking pictures, I figured I'd have to kind of pretend to take part in the bath before snapping some shots.  I was kinda sitting down in the shot below.  It was just a man and his wife in this bath, so I really had to take this picture off center as to not be a creeper. 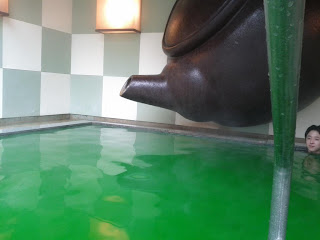 The picture above and the picture below are of the nuclear meltdown bath. 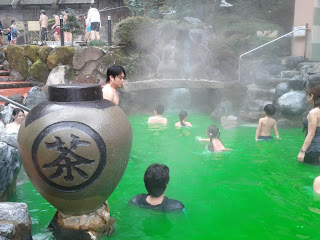 Hah just kidding, it's green tea.  Although the richness of the green kinda made for a more radioactive, toxic appearance more than anything. 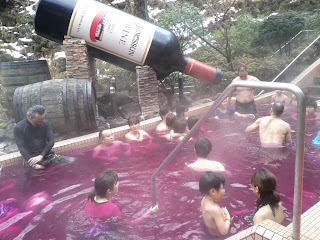 Lastly, the wine bath.  The wine from this bath smelled very sweet.  This bath had a scheduled show, just like the coffee bath up above.  It's cool because once the show begins, that wine that dribbles out of the wine bottle turns from a very light purple to a nearly burgandy red.  Little kids were going nuts with letting the wine bottle spritz its contents over their body (cue the image of the horror movie carrie).  In the same vein as the coffee bath, we all lined up in the bath and had our fair share of a red wine dousing!

As for Mori No Yu, the nekkid bath, I couldn't take pictures (hell I wouldn't if I could).  For the most part older Japanese males are in way better shape than their Gaijin counterparts (Mike and Jason notwithstanding =p)

I lifted this image off of their site:

That's what it looks like, no gimmicky flavored baths here.  My favorite were those barrel things you see in the bottom right.  Instead of the rough edges of a wood finish, it seemed that somehow the wood fibers at the edge were impregnated with some sort of super-soft cotton/polyester fiber.  So the edges of the barrels were REALLY soft.  I was able to hang my arms and legs out of one (I was positioning my body to use my you know what as a freakin' sun dial) for half an hour and it was still comfy.

That was pretty much it.  Really fun day.  I would definitely go back.  Cross my fingers for no new rashes tomorrow.  I'll be heading off to tokyo tomorrow.